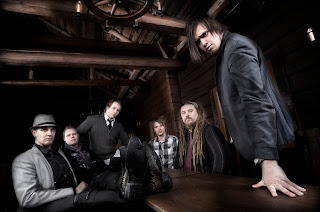 Fadeout - Seinajoki, Finland.
Fadeout was originally formed in 2001, and has since then played extensive independent touring and recorded five demo tapes. In the year 2006 the band went through radical lineup changes which resulted in a more ambitioned and focused group than before. Now in the present day Fadeout has shot to the top of the local rock scene with a powerful reputation backing the intensity of their live performances and armed with a killer release, Western Finland's biggest buzz band are set to conquer in rest of the 2010.
MUSIC
Fadeout has created a brand that can only be described as a Evolutionary Rock. Style that has bits and pieces thru out the history of rock forming to prog/rock/pop genres. This sound can be heard on the new songs Open White, The Peasant and Vertical, which should warm things up before a bigger bang beginning of next year, when debut album "To Protect Our Way Of Living" is scheduled to be released. Album is mixed by Tim Palmer (U2, Ozzy Osbourne, David Bowie, Pearl Jam, HIM, Porcupine Tree...) and mastered byt Svante Forsbäck (Rammstein, My Chemical Romance, Backyard Babies, Volbeat, Apocalyptica...).


PROMOTIONAL RELEASE
The release of first teaser from the forth coming album ”Open White” marks one of the most highly anticipated releases for an independent band in Finland. It layers Marco pajula's raw-velvety vocals and blue-collar lyrics with crowd-pleasing guitars to create a fine collection rock for a new generation of fans. With standout tracks like "Open White," Fadeout will be dominating hearts of fans far and wide, Fadeout is an essential addition to any music lover's library.